Some things to consider when contemplating a SSD upgrade 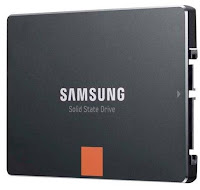 If you’re thinking of getting a Solid State Drive (SSD) for your desktop or laptop computer the chances are you're looking for a performance boost. Either way here are a few things to consider before proceeding.

A SSD is a type of computer storage device that has no moving parts. In fact an SSD is a bit like the memory card used in a digital camera but bigger and faster. The lack of moving parts and architecture of the SSD allows data to be transferred to and from it at very high rates. Consequently that delivers a big performance boost to most modern desktop or laptop computers which is the main reason they’re so appealing.

Many who’ve been interested in an SSD upgrade since they first appeared on the scene have the perception that it’s prohibitively expensive and, therefore, are unwilling to go there. You may also feel that a 128Gb or 256Gb capacity is insufficient for all programs and files. Whatever your concerns, I’ll do my best to address them.


SSD prices have been dropping steadily for a couple of years now but have stabilised. At the time of writing it's possible to buy a Samsung 840 series 250Gb SSD for under £140 which is a great product at a very reasonable price. For most 250Gb of storage in a laptop or desktop is plenty. However for those who need more space £270 will buy the larger 500Gb SSD from the same range. The smaller 120Gb drive comes in at just under £80. it's also worth considering the alternatives discussed later on in this article.

If you’re thinking about upgrading your current desktop or laptop with a SSD here’s what you should expect to see from the first reboot. Startup will be a lot faster. Programs and files will launch or load faster, and your search results will also turn up faster. This short video provides a demonstration of the kind of performance difference I've seen in real world situations. Furthermore in an upgraded laptop it’s likely that, when not connected to the mains, battery life will show an improvement. The reason for this is because the power consumption of an SSD is much lower than that of a mechanical HDD. It's also likely there'll be a reduction in noise levels as a SSD is completely silent.


However, to be clear, having a SSD on your system will not improve all aspects of it's performance. For example the speed at which your pc’s browser renders web pages is more likely to be limited by internet connection speed and, perhaps, graphics performance. Similarly tasks which are dependant upon the speed of the computer’s CPU such as rendering a video will continue to be limited by the speed of the CPU. In short the SSD upgrade will address what is most likely the computer’s biggest bottle-neck. However it won’t miraculously transform the computer into something it isn't.

If you’re getting a SSD with a brand new computer you may want to skip this section and move on to the next. This section is for those who are upgrading a computer with a mechanical HDD to a SSD.

A key part of the migration process is the transfer of your current operating system and all installed applications. For most the path of least resistance involves imaging or cloning the contents of the existing HDD and replicating that image straight over to the SSD. With that in mind it's desirable to be able to have both HDD and SSD connected while running some drive imaging program. 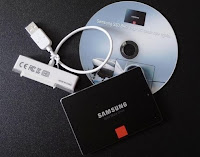 In some cases SSD vendors include a kit with their SSD. But if not they're available to buy separately. The migration kit is likely to contain a CD and a cable or adapter to facilitate the temporary connection of the SSD to the computer via USB for the duration of the cloning process. Once that’s done, the SSD is mounted inside the computer and, in most cases, that’s in place of the existing HDD. However it is perfectly feasible to have a system which makes use of both a SSD and a HDD where there is physical space within the computer to do so.

Laptop users who need the extra storage space may have the option to replace their laptop’s DVD drive with a compatible caddy within which the SSD/HDD is mounted. This allows the user to retain the existing HDD and add the SSD. This approach enables the benefits of SSD performance plus the benefit of the storage capacity of a HDD to host larger volumes of data. In this configuration it’s normally the case that the SSD hosts the operating system and all apps and the HDD contains user data to exploit the benefits of both devices.

For those without the luxury of enough internal space for multiple drives cloud storage may be the best available compromise. Cloud storage delivers a whole bunch of other benefits aside but I’ll save that detail for another article.

It’s worth noting that cloning a system from HDD to SSD can, in some cases, give rise to compatibility issues. I’ve, personally, not encountered any in the migrations I’ve done thus far but have been advised that it is possible. With that in mind the ideal World approach is to install the OS and all apps from scratch which can be a lengthy process, especially if, for whatever reason, the installation media is no longer available. Having installed the OS and all apps I’d most likely use a utility like Windows Easy Transfer or an equivalent to backup and transfer all user data and configuration settings.

If you know how to install a HDD into your desktop PC, installing a SSD is very similar; in fact it’s practically the same. However, there are a few things to note when installing a SSD.

Laptops are all built differently and while most make it easy to gain access to the internal HDD there are some which will be more complex, requiring more time and effort in disassembly/reassembly to install a SSD.

For desktop computers access is normally quite easy. So installation may even, in some

cases, be a tool free experience. However it’s worth checking how an SSD is going to be mounted inside the computer’s drive bay. I say this because a SSD is physically much smaller than the default sized desktop HDD. In this case it’ll probably be best to use what’s known as a mounting kit within which the SSD sits. The outer edges of the kit then sit snugly within normal sized HDD bay.

Also important to remember when installing a SSD is to check and, if necessary, modify the computer’s BIOS configuration so that the SATA setting is at AHCI rather than IDE. It may alternatively be called SATA Mode Selection or SATA Mode. Each system will name it differently but you’ll easily find it with a little exploring around the BIOS. Performing this step ensures that you get maximum performance from your SSD.

If your desktop or laptop is still under warranty and you’re concerned about voiding the warranty it’s worth contacting the vendor to seek advice. They may provide a retro-fit service whereby they’ll replace your computer’s HDD with an SSD while retaining the warranty.

It’s normal to expect a SSD to come with a multi-year warranty. However it’s undesirable to be in a situation where the warranty process is needed. So it’s advisable to choose a SSD that’s got a good reputation. User reviews are a good source of product quality and/or follow-up service provided by the vendor. Additionally for Windows 7 users it’s advisable to follow these tips from Microsoft to ensure you maximise the chances of getting a long lifespan with speedy performance out of your SSD.